Description of the Eliza Statue : A larger than life bronze statue of a bathing girl, with arms up as if about to take a plunge into the Swan River at Crawley Bay. At present lightly covered in shag (big large bird) poop.

Location : On Mounts Bay Road (near the Swan Brewery) right there in the Swan River, you can’t miss her as she is usually (of late) dolled up in a costume.

History behind the Eliza Statue : The Eliza statue commemorates the Crawley baths which were a popular place to swim between 1915 – 1960’s. The baths were opened in 1914 and became a place where hundreds of children learnt to swim. Olympic legends Murray Rose and Jon Hendricks were Crawley bath regulars. Local artist Tony Jones and his son Ben were commissioned to create a fitting statue for the location. Eliza was unveiled by the exiting Perth Lord Mayor, Peter Nattrass, Monday 15th of October 2007. Included in the unveiling presentation was a male and female dressed in 1940’s swim wear.

Has Eliza Set A Fashion Trend ? : It didn’t take long for Eliza to become legendary. The sculptor behind the Eliza statue Tony Jones was quoted as saying “If people don’t like it, the birds probably will.” Well let me tell you, Eliza has become quite a little icon in her short life in the river. Yes, the birds are having a ball with her, but some people are too. Between the birds and a few pranksters, motorists along Mounts Bay Road are being entertained by the ever changing look of Eliza. At last Perth has a dressable piece of public art, just as Sydney has Il Porcellino and Brussels has Mannekin Pis, we can now boast having one too. Lets face it, this statue would have otherwise gone unnoticed had it not been for the clowns (or most likely undergrads from UWA) who took the time to dress her up for Melbourne Cup, Christmas, New Years Eve and the rowing regatta. AND whatsmore Perth has embraced the idea of dressing Eliza up, her last dressing saw her bearing the Scotch College uniform, prior to a rowing event on the river. You go girl, its about time Perth embraced its public art and motorists had a good laugh. Moral of the story never place a statue anywhere near a University. 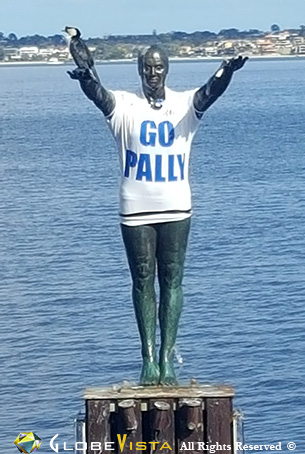