Scotland, the “home of the brave”, is a country within the United Kingdom. Scotland has partial self-government within the United Kingdom as well as representation in the UK Parliament. Settlers began building the first known permanent houses on Scottish soil about 9500 years ago, and the first villages began popping up around 6000 years ago. Scotland is well known for its kilts, bagpipes, whiskey and Haggis. 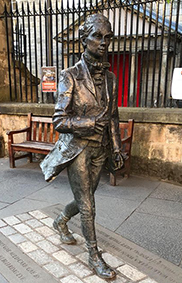