Burswood is a suburb of Perth in Western Australia. It can be found along the Swan River and includes the Crown Perth casino and Belmont Park racecourse. The area was named by Henry Camfield, one of the settlers of the Swan River Colony in 1829. He was granted 1,000 acres of land which he named Burrswood, in honour of an area in Kent, England.

If you take a walk through Burswood Park, near the Crown Casino, you will find an array of statues and sculptures depicting the many great figures who played an important part in Western Australian history. They include statues of Paddy Hannan, Willenm de Vlamingh, Herb Elliott, Shirley Strickland, Dame Mary Durack and the sculpture of the State’s bird emblem, the black swan (which appears on the Western Australian flag). 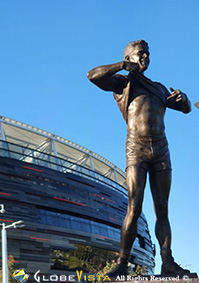