Fremantle (or Freo to the locals) is located about 19 kms from Perth, Western Australia, at the mouth of the Swan River. The city was named after English Naval Officer, Charles Fremantle, who in 1829, set up camp on the shores of Fremantle and took possession of the western part of the continent on behalf of the British. Since then the town has grown into a city, become famous for its cafe strip, hosted the America’s Cup and continues to serve the best fish and chips. Many of the city’s public art collection pays homage to its colourful past and the people who helped shaped it.

To The Fishermen - The Jetty

Mark of the Century

At The Bottom of the Harbour

Leda and the Swan

Quokka Goes For An Eagle

Safe For Sun and Sea

Woman Needs a Man Like A Fish Needs A Bicycle 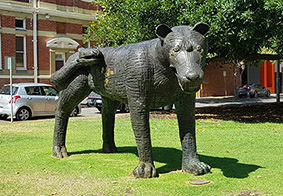