Perth is the capital city of Western Australia and was officially founded on the 12th of August, 1829, by Lieutenant Governor James Stirling on King George IV’s 67th birthday. One of the many unique features of Perth is that it is the most isolated Capital City in the World, another is its extraordinary ability to place its public art in the most unusual locations . 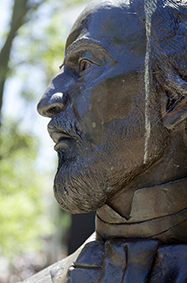 Kangaroos in the City