Date Unveiled: The statue was inaugurated by Indonesian President Joko Widodo on 22 September 2018.

Description:  The monumental 3.5 tonnes, 75 m high statue of the god Wisnu riding Garuda (mythical bird) is made from copper and brass.  The statue is fitted over a concrete and steel skeleton. Garuda’s wingspan is 64m. The statue sits on a pedestal making the entire structure 121m high. Wisnu holds a lotus flower, mace, conch and a discus in his four hands. His head and shoulder wear are covered in gold and glass mosaics. 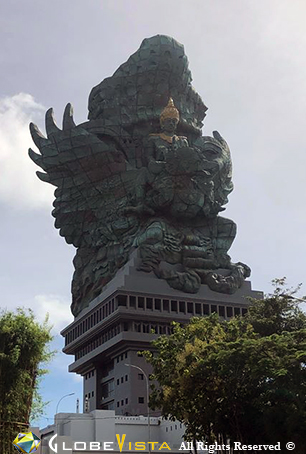 “We know that Bali thrives from tourism and culture. If we don’t develop the culture it will disappear one day. So we have three responsibilities: to preserve the culture, develop it, and find new alternative cultures.”

“to build something great for our children and grandchildren, for our generation and for the world”.

Things you may not know about the  Garuda Wisnu statue:

Garuda Wisnu is Indonesia’s tallest statue and the 4th largest in the world.

The statue is 30m higher than the Statue of Liberty.

The statue was built in Bandung firstly in wax, then fiberglass, then finally copper and brass. The statue was then cut into sections and hand welded on arrival at the park.

The sculptor flew to Canada to do tunnel tests to make sure the statue could handle high winds.

There are special joints in the supporting structure due to the unusual and complex shape of the statue.

There are 11 steel girders inside the statue all meeting at the same point to give added strength.

Due to the unusual shape repairs can only be made from the inside. This means parts of the statue will have to be cut to fix any damage.

The glass and gold mosaics on the face of Wisnu took more than 2,000 hours to place due to the intricacy of the statue’s surface.

The statue overlooks Bali and can be seen within a 20km  radius of Kuta, Sanur, and Nusa Dua.

Garuda is acknowledged in Indian, Cambodian, Indonesian, Thai and Myanmar culture. As would be expected there are numerous myths and legends surrounding Garuda. The Indonesian myth revolves around Garuda, his mother and the search for the elixir of life.

As the story goes, Garuda was the product of Resi Kasyapa and Winata, one of his 29 wives. Garuda also had a brother Aruna, and 1000 half brothers (who were cosmic snakes) by his stepmother Kadru. Before Garuda had hatched Winata and Kadru got into a heated argument over Ucaisrawa, a cosmic horse. Kadru claimed that the horse’s tail was white and black whilst Kadru was adamant that the tail was simply white. As tempers flared they decided to make a bet. Whoever was wrong had to become the other woman’s slave. Unbeknown to Winata, this was all a trap. Kadru knew the horse’s tail was white. She had her children snakes spray part of Ucaisrawa’s tail with their venom turning it black. Honouring the bet, Winata became Kadru’s slave. Meanwhile, Garuda had hatched. His glare was so powerful it lit the heavens and scared the gods. When Garuda discovered his mother’s fate he approached his half-brothers, the snakes. He asked them how he could buy back his mother’s freedom. They told him the only way would be to find amerta, the elixir of life, and give it to them in exchange.

Before setting out on his quest he visited his mother. She told him that to obtain the amerta he had to venture to the island with the holy mountain. The amerta was there but guarded by villains. In order to survive the journey, he needed to kill and eat the villains. However, she warned Garuda not to kill the Brahmin, as his father was a Brahmin. Winata assured her son that he would be protected by several gods. Bayu, the god of energy will look after your wings; Candra, the goddess of the moon, will have your back and; Agni and Angin, the gods of fire and wind, will protect your head. With this, the mighty beast flew off.

On reaching the island he began slaughtering the villains and feasting on them until he reached the peak of the holy mountain, Somaka. There he was set upon by Indra’s troops. Indra was the king of the gods. With his talons, claws and powerful beak Garuda killed them all one by one. He then swooped down off the mountain with his mighty wings to the sea where he collected water. He used the water to put out the fire guarding the entrance to the amerta cave. All that remained was for him to kill the two Nagas (snakes) guarding the elixir of life. After making a meal of them he took the amerta and flew off.

Just as Garuda was nearing home the god Wisnu (protector) saw him carrying the amerta. Wisnu asked Garuda if he would become his transport to fly him where ever he was needed in the world. In exchange, he would allow Garuda to use the amerta to free his mother. Unable, by law, to deny him, Garuda granted the request. Garuda carried the amerta back to his half brother snakes. On seeing the great bird with the elixir in his claws they released Winata. Garuda told the snakes before he would hand over the amerta they must cleanse themselves. As they slithered off, the now angry god Indra suddenly appeared and stole back his precious amerta. Garuda in the meantime had flown off to serve Wisnu.