Description: A bronze statue of Scottish poet Robert Fergusson  (5th of September 1750 – 16th of October 1774).  The dandy poet is depicted walking down Canongate with his coat tail flapping in the breeze. Clutched in his hand is a book. He wears his long hair in a neat braid that runs down his back.

Commissioned by: Friends of Robert Fergusson

Location: The statue of Robert Fergusson is located outside Canongate Kirk, where he is buried, Edinburgh, Scotland. 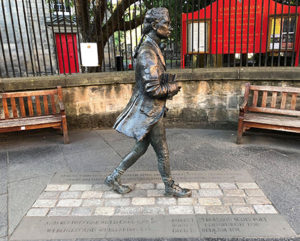