Cast At: Iron Foundry of Antoine Durenne in Sommevoire, France.

Date  Unveiled: The fountain was unveiled in 1872

Description: The Ross Fountain features at the top four female figures representing arts, science, poetry, and industry. Around the base features cast-iron mermaids, cherubs, and walrus and lion heads. Following the restoration, the fountain was painted back to its original colour, an eye-striking turquoise, brown and gold. 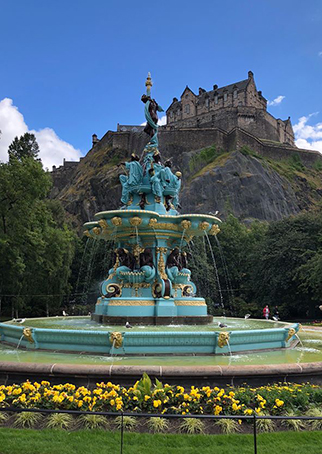 Background to the Ross Fountain: In 1862 gunmaker Daniel Ross was wandering around the Great Exhibition when he spied the fountain. So impressed he purchased it at the princely sum of £2,000. In 1869 he gifted his purchase to the City of Edinburgh. The fountain was shipped in 122 pieces to Leith before being assembled in Princes Street Gardens.

Unfortunately, Daniel Ross died in 1871 a year before the unveiling so never got to see the fountain in all its glory.

In 2010 the Ross Fountain had fallen into a serious state of disrepair with no water flowing. It was decided the much-loved landmark needed a full-on restoration by Glasgow based company Applied Engineering Design (AED). Costing around £1.9m, the fountain soaked up over 650 litres of paint and took over 40,000 hours to restore.

Controversy: Not all were pleased with the gift. Dean Ramsay, the minister of St John’s Episcopal Church, described the fountain as ‘grossly indecent and disgusting; insulting and offensive to the moral feelings of the community and disgraceful to the City.’