Date Unveiled: The Fork was originally unveiled in February 1995 to celebrate the Alimentarium’s (food themed museum) tenth anniversary. It was reinstalled in 2008 as a permanent sculpture.

Location: The Fork of Vevey is located off Quay Perdonnet in Lake Geneva, outside the Alimentarium, Vevey, Switzerland. 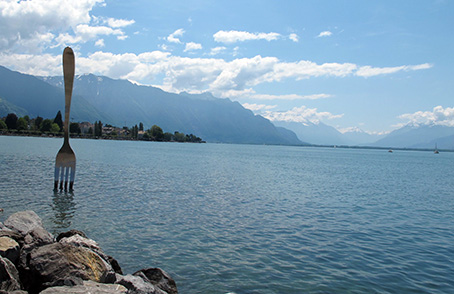 Background to The Fork of Vevey:

The huge stainless steel Fork was commissioned in 1994 as part of the 10th-anniversary celebration of the Alimentarium (a food-themed museum). During its time sticking out of Lake Geneva, the public, Tourist Office and Vevey Town Council grew to love the four-prong cooking utensil. Unfortunately despite all efforts, Vevey couldn’t obtain legal permission to keep the fork. Some feared it would be the first of many installations plonked in the lake.

The temporary installation was pulled from the lake the following year and placed in a garden outside the Berndorf cutlery factory in Littau.

In 2007 the Fork journeyed home to Vevey for a temporary exhibition. The people of Vevey soon realised the foolishness of their ways and demanded the council get the fork back by hook or by crook. A public petition was set up and eventually, their hard work paid off and the Fork of Vevey was reinstalled in Lake Geneva, in 2008.