Public Art: Watch Over You statue

Date Unveiled: The 2014 unveiling coincided with the start of the 2014 Australian Surf Life Saving Championships

Description: The bronze group feature two lifesavers looking out across Scarborough Beach. The male and female surf lifesavers are wearing traditional one-piece suit bathing suits and caps. The man has his arms behind his back looking intently at the beachgoers. The woman stands with her hand on her hip ready to jump into action.

Location: The Watch Over You sculptures are located at the bottom of the Scarborough amphitheater overlooking the beach, Scarborough, Western Australia. 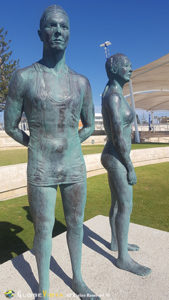 SSLSC Background: The Scarboro Surf Life Saving Club (SSLSC) was founded in 1928 following a drowning tragedy in 1906. The club is located on the Esplanade and in 2018 moved into new purpose-built facilities.

The Tragedy: Prior to the SSLSC being officially founded the sandy area of Scarborough was subdivided in 1906. One of the families who bought a block at Scarborough were David and Elizabeth Gornall.

In 1916 the Gornall’s and five of their six children decided to camp on their block over the Christmas break. They packed up their horse and cart from their home at Mt Hawthorn to frolic by the beach during the summer break.

At midday on the 30th of December, the family went down to the beach for a swim. The water was quite rough when one of the daughters, Kathleen, became caught in a rip.  Despite being a good swimmer the Indian Ocean was not about to let her go. Her brother tried unsuccessfully to reach her and raised the alarm.

Though this was prior to lifeguards, there was a “life-line” installed at the beach. Unfortunately, the 150-yard rope had been cut and was only now 50 yards long. A human chain was formed. About 8 men held on to each other as they entered the ocean. As the current pulled them to and fro the man closest to the beach lost his grip and the men disappeared under the waves.

Of the 8 men who ran to the rescue five of them would lose their lives. The 16-year-old Kathleen also drowned.

This incident was the catalyst for the establishment of the Scarboro Surf Life Saving Club some 12 years later.

Since 1928 the club has rescued thousands of people from the sometimes unpredictable surf conditions.

Reference: The City of Vincent Library and Historical Centre