Description: The bronze life-size statue of Charlie Chaplin (16 April 1889 – 25 December 1977) depicts the comic genius and silent movie actor in his most famous role, The Tramp. This statue is a slightly modified version of the statue unveiled in London in 1981.

Location: The Charlie Chaplin statue is located on the lakeside promenade in front of the Alimentarium Museum, Vevey, Switzerland. 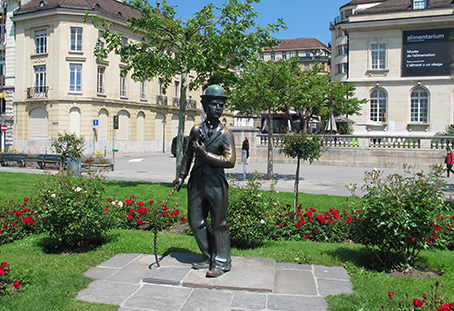 Who was Charlie Chaplin?: Charlie Chaplin was born in England in 1889 but found fame in America during the silent movie era. Considered a comic genius Chaplin created the iconic character The Tramp when he was 19.  In 1914 Chaplin began working for Keystone Studios where he began directing and acting in his own films.

Five years later he co-founded the distribution company United Artists, where he secured complete control over his films. Despite the advent of sound in movies in the late 1920s Chaplin refused to make the shift. Instead, he was happy to continue producing and directing silent films, including City Lights and Modern Times.

As clever as Chaplin was he failed to “read the room” during the onset of World War II. The world had grown cynical and suspicious. Chaplin however, saw an opportunity to make fun of Hitler during this turbulent time. Let’s face it, the two looked very similar.

The Great Dictator marked, not only Chaplin’s first talkies film but his sudden and crushing downfall. It wasn’t the premise of the Great Dictator that the audience objected to but the speech that Chaplin made at the end of it. As the film concluded Chaplin went out of character to plead against war and fascism. Fans did not want Chaplin’s political views, they just wanted to be entertained. Now the two were no longer be mutually exclusive.

More trouble was to beset Chaplin when J.Edgar Hoover and the FBI began a smear campaign against him. Using a paternity suit that Chaplin was fighting in court, they laid four indictments against him, including an alleged violation of the Mann Act.  The Act prohibited the transportation of women across state boundaries for sexual purposes. Well, you can imagine the press and gossip columnists had a field day. It didn’t help that Chaplin had also married 18-year-old Oona O’Neill at the time.

The FBI, still peeved that none of their Mann Act charges stuck, changed tact. They now set about accusing Chaplin of being a communist. As McCarthyism spread through Hollywood, it was clear the FBI wanted Chaplin out of the country and launched an official investigation. Chaplin was subpoenaed to appear before the House Un-American Activities Committee.

It would take a few years but in the end, the American government won.

In 1952, as Chaplin boarded the RMS Queen Elizabeth for the world premiere of his latest film Limelight in London, the powers that be were planning to revoke his re-entry permit. In order to re-apply Chaplin would have to go through an interview process where he would be quizzed about his political views and moral behavior.

When news reached Chaplin he decided to sever ties to the US for good. In 1953, Charlie Chaplin, his wife, and children settled in Switzerland on an estate overlooking the stunning Lake Geneva. It would be here, in the perfect settings, Chaplin would live out his days. Chaplin continued to make movies but he would never experience the enormous success he did in his early days.

In 1973 Chaplin accepted an offer to return to the US to accept an honorary Academy Award. I think the 12-minute standing ovation (longest in Academy history)  said it all.

In 1977, the world lost one of the greatest cinematic geniuses of all time. Charlie Chaplin was 88.

Things You May Not Know:

Following his death, two unemployed immigrants dug up Chaplin’s coffin and stole it. They attempted to extort money from his wife but were caught in a police sting. The coffin was found buried in Noville and later re-interred.